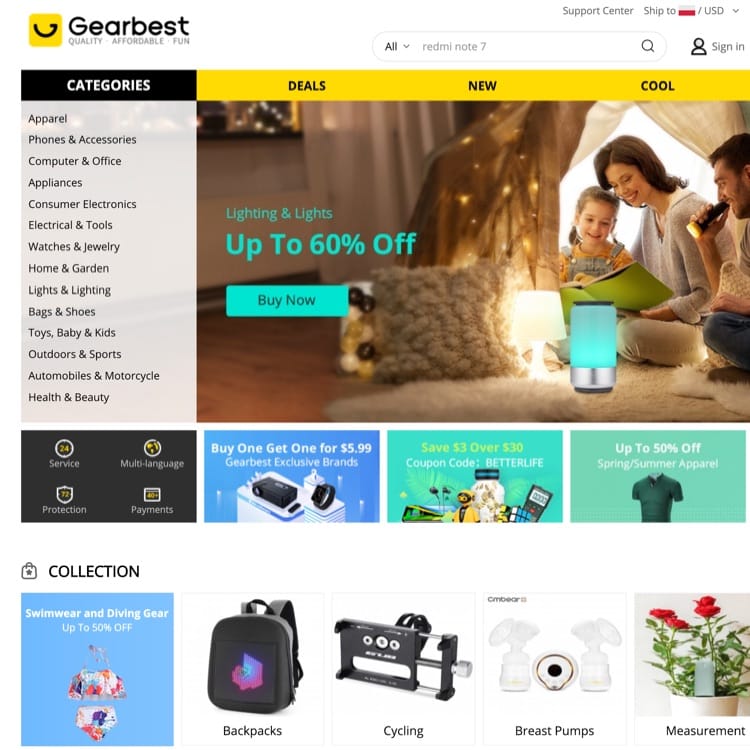 update 20.09.2021 – Gearbest store has been inactive since 9th of September. Wee seek for information about its future activity.

Shopping in Asia is definitely gaining popularity and it’s good to know that Aliexpress is not all that China has to offer.

In fact, recently I’ve been finding out more and more frequently that many items can be quite expensive on Aliexpress while at the Gearbest portal, which I would like to devote some time to, you can save even up to a few dozen dollars! If you have experience shopping on Aliexpress, taking advantage of this second option will not pose a problem but if you are not familiar with the subject, I invite you to keep reading.

Let’s start with buying in China and if it is worthwhile.

Many people will probably ask themselves now if it’s at all worthwhile to buy in China. To tell you the truth, for a long time I wasn’t sure, either. You hear a lot of bad news about Chinese quality, but not much is being said about China more and more frequently emphasizing solid production control and if you make good choices as to the sellers, you can buy cool stuff at really good prices.

I won’t force anybody to do anything but so far practically in every case, I have been happy with Chinese products, including electronics, which one can frequently buy at a fraction of European prices. If you don’t mind waiting two or three weeks for your package, why not try this type of shopping?

What is this Gearbest thing? A short profile

A clone of a clone of a clone… it’s become quite confusing, but for years I’ve been under the impression that most of the large internet stores are using just one template nowadays. Starting with eBay or Aliexpress, we will come across a similar portal design, and in fact, in this respect, Gearbest does not stand out among its competitors.

But, to be really honest, it seems to me that contrary to appearances, it’s a perfect situation. We enter a totally unknown portal and we know practically right away how to behave there. Browsing the website is extremely simple, and the way it works is similar to Aliexpress, that is we simply purchase items directly from the manufacturers. What else could one want? Maybe better payment options, but we’ll get back to it later.

Is Gearbest really so cheap?

For sure more than one of you, when looking for that perfect TV set or toaster oven, frequently browses through the offers from different stores, not just online, so you probably already know that it’s impossible to specify which store is cheap and which one is expensive. We can buy a really cheap TV in a certain store but when later on we purchase a toaster oven at the same place, we may find out that we paid way too much.

With Gearbest, the situation is similar. Their prices may be much lower than on Aliexpress but sometimes the other portal will be cheaper after all. I would recommend “traveling” between the two stores and looking for an interesting deal. I’ve recently bought a used processor for my old laptop, which I wanted to “rejuvenate” a little bit, and I paid almost $7 on Gearbest. My wife got lucky as well – she got her dream curling iron for $23 instead of $31, which was the lowest price on Aliexpress.

However, Gearbest has two important advantages. First of all, which I find amazingly interesting, the company has warehouses around the world, including also Europe. This is great news because we are still spending very little on the purchase but if a given item is in a European storage warehouse, we will not only have it sooner in our hands, but we can also forget about the stress caused by customs control and the possibility of adding customs duties. Secondly, the points: if someone buys in Asia like crazy, and I will be the first to fess up to this addiction, you will quickly accumulate an interesting number of points, which you can later exchange for dollars and lower the prices.

How to buy and pay on Gearbest, or the least pleasant part of shopping

Aliexpress regulars most likely won’t have any problems shopping on Gearbest. Yes, unfortunately, you have to set up an account and there is no other option. The process itself is simple, it takes a few minutes and right away we become a full-fledged user, ready to open the wallet and order our favorite “toys”. Browsing is downright intuitive, and, as usual, we add the selected items to our virtual shopping cart, then we confirm them and move on to the payment stage.

Yes, this is probably the worst moment since most likely it won’t work without setting up a PayPal account and supplying it with cash in advance if the account is empty. Personally, I don’t like these payments because transferring funds from a bank account to PP may take even 2-3 days.

On the other hand, you can pay with credit cards, but I would strongly discourage it. In recent years banks have been charging sickening conversion fees unless we have an account set up in dollars. One alternative would be arranging for a virtual card which you can also use to pay. There is no conversion fee here, but remember you will be hit with annual card fees.

OK, so what about customs duties, you’ll ask?

They say death and taxes are the only things that are certain in life, but Gearbest seems to be breaking the rules in this respect. I have already mentioned the European warehouses, right? If you are buying items whose price exceeds legal thresholds for customs duties, I would recommend double-checking in the store if there is an offer with European warehouse availability; it doesn’t matter which country as long as its walls do not reach beyond the borders of the jurisdiction of our dear European Union.

The goods are shipped within the union then and, even if it ends up a tad more expensive, think how much more you would be paying if the officer at the border happens to check your package. I realize that hoping to skip the customs generates a pleasant thrill but it doesn’t really impress me. If we order directly from Asia there is always a possibility that we’ll pay customs duties at the border if the package is worth more than 150 euro if it is marked as a “gift”.

Does Gearbest protect the buyers and allow to rate sellers?

All right, let’s get serious now. You probably want to know if Gearbest in any way protects you, the buyers, in case anything weird should happen. Yes, you will be surprised because the portal treats this matter in an astonishingly professional manner.

So yes, the first case is of course a package with a broken item or regular trash goods, where a Chinaman skimped on some copper or tin and something’s not working. The matter is very simple since after receiving the package we have three days to file a complaint about the problem. Gearbest will refund the money or exchange the item for a new one. Interestingly enough, if the item needs to be returned, you won’t have to worry about paying for shipping it back. The portal guarantees covering up to 50 bucks, so I would give them a huge kudos here.

Gearbest also allows almost four times more days to return the goods than legally required – literally since our laws limit it to 14 days and the portal offers as many as 45. Within this timeframe, we can of course return a working item if we change our mind, and receive a full refund.

There is a catch here, though – the portal doesn’t refund the money for shipping the goods back. If we buy something for a dollar or two, it won’t be worth returning. Remember that China subsidizes shipping for its manufacturers and this is why shipping, for instance to Europe, is free although in reality, it is not cheap at all.

Finally – here comes the most interesting fact. Gearbest has its own warranty support. From the moment we receive our package we have exactly one year to take advantage of warranty services, for free, including free shipping. I won’t lie, the customer protection program is what really convinced me and I readily place orders there 😉

To be honest, although I had been ordering items from China for a long time, I had no idea whatsoever about Gearbest, somehow I never came across this portal. I found out about it while watching some video on YouTube, where a dude was tinkering with a computer and ordering components there.

I remembered the portal much later, though, when I was looking for a new headset with a microphone, I still remember it today. When reading various reviews of the equipment, in my browser I found an ad for a store that had the headset I was looking for. I almost ordered it on Aliexpress when I realized that I had seen this headset for a few dollars less on Gearbest!

And this is how it all started. I quickly found out that very frequently Gearbest is cheaper, especially in the case of electronics. Additionally, you collect points and on top of that, they have an interesting protection system. What more could one say.

Time to sum it all up… ok, is it worthwhile or not?

It’s not my job to force anybody to pick one portal over another to order in China. I will tell you, though, that if I were to total all the savings that came from using Gearbest… oy, I would probably be enjoying some grand vacation now 😉 I would recommend checking it out and comparing prices, I think this will lead you to draw specific conclusions.

Of course, please share in the comments if you like this portal and what adventures you’ve had there.